It is not at all uncommon for residents of Naperville to discover bat colonies in their attics.  ABC Humane Wildlife’s Naperville bat removal technicians have years of experience and are prepared to handle any bat situation.  Because Naperville’s charming landscape features several forest preserves and parks as well a major river, the city is full of beautiful plants, trees, and a wide variety of wildlife.  The combination of the DuPage River and the wooded land of the Greene Valley and Springbrook Prairie Forest Preserves makes a particularly suitable habitat for bats.

Our licensed Naperville bat removal professionals are available 24 hours a day, every single day of the year to diagnose your bat problem, remove the bats from your house, fix any damage they may have caused, and prevent them from returning.  Our bat exclusion techniques are second to none.   Animals are a crucial part of Northern Illinois’ ecosystem, but when they begin invading peoples’ homes, they become a major problem. ABC Humane Wildlife has been serving the bat removal and exclusion needs of Naperville residents for over 40 years.

ABC Humane Wildlife has 24-hour specialists available to answer your bat questions and help begin to solve your bat problems day or night. We make sure that when you need us most, we are available.  Bats host many illnesses like rabies and histoplasmosis, and every minute you wait to take care of the problem is another minute your family is at risk.  Call ABC Human Wildlife now to begin the process of removing bats from your home so you can sleep soundly again. 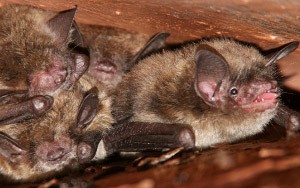 Our focus is always on customer service and getting the job right the first time.  ABC Humane Wildlife Naperville bat removal specialists always utilize the most up-to-date, humane techniques to ensure your home is safe

“They came out and installed an excluder.  This allows any bat that is in there at the time to get out safely, but then also safely blocks their return to the location.  It worked well.  We have used this twice.  They also sealed up any other location that could be used as an entry point.”

“I was so extremely impressed by the thoroughness of the inspection and the professionalism and honesty of the inspector I had to write a review…I trust these guys will really solve the problem.”