Efficient and Humane Raccoon Trapping and Removal Throughout the Chicagoland Region

When there’s a raccoon in your house, anything can happen. Chewed wires can start fires. Raccoon droppings can sicken you or your family. Damage can be permanent. It doesn’t have be.

Raccoons have their place in nature—not in your house. “I was extremely pleased with ABC Wildlife service from the beginning to the end. Their staff is amazing! The service guys that came out to my home were knowledgeable and polite. They caught seven raccoons over a period of time that were living in the eaves of my home. Excellent Service. Thank you so much!”

What Happens When There’s a Raccoon in My House?

Once inside they move the insulation around creating comfy bedding and latrine areas where they deposit their droppings. They chew on wires, damage fans, and create openings to go in and out.

Having raccoons in the attic for even a short time can result in permanent damage, including a lingering musty smell caused by their urine and feces. We solve every wildlife issue from A through Z. When raccoons invade your home, yard, attic, or business, we make solving your raccoon issue and raccoon-proofing your building as simple as A-B-C.

Your raccoon problem doesn’t end when the first raccoon leaves. Structural damage, waste, and hidden entrances can keep them coming back. We work with you until the problem is fully solved by removing the contamination, repairing the damage that they leave behind, and sealing the entry points.

Efficiency combined with humane trapping methods and respect for wildlife. 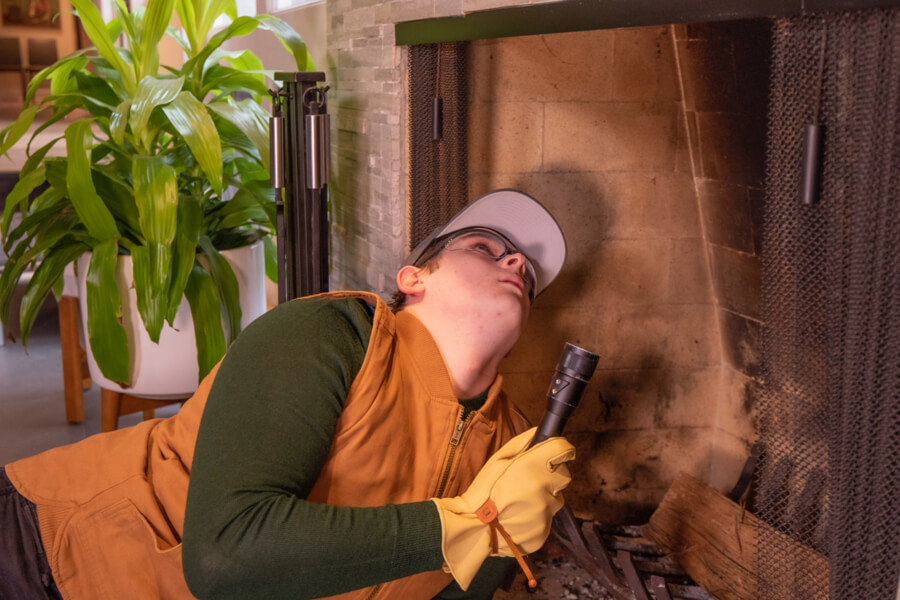 Our staff of skilled tradespeople install animal-proof products so animals can never enter your home again. Why Do I Have Raccoons?

In spite of our poor habitat management practices, some species of wildlife have endured and even thrived alongside us.

Raccoons, for instance, have greater population numbers today than when covered wagons crossed this area 200 years ago. Fall population estimates for raccoons in the North Shore suburbs around Deerfield, Highland Park and Winnetka have reached 99 raccoons per square mile- this is an emerging public health threat.

The Best Ways to Repel Raccoons

Raccoons are both clever and tough, and due to their remarkable adaptability, they are able to thrive in any number of living situations. Creating an environment to repel raccoons can be a challenge, but there are definitely steps homeowners can take to make their property less appealing. Raccoons are opportunistic, and if your neighbor’s house…

ABC Humane Wildlife Control & Prevention specializes in the safe removal of raccoons, remediation of the damage and disease causing parasites raccoons leave behind, and structural exclusion to prevent nuisance raccoons from returning. Raccoon trapping and removal should take place quickly, once raccoons’ presence is detected.

Each ABC Wildlife Control Technician is individually licensed by the Illinois Department of Natural Resources to control raccoons and other mammal species. You can feel confident about the capacity and character of every member of our team because ABC Wildlife’s expert personnel are covered by General Liability insurance and pass stringent background checks. We are standing by to solve your nuisance raccoon problem today.

More than 70,000 Illinois homeowners report wildlife problems each year, and raccoons account for more than 60 percent of their complaints. Homeowners in the Chicago suburbs, especially the North Shore suburbs, are particularly vulnerable to raccoons entering their attics because the population of raccoons in Illinois is greatest in the towns around Northbrook, Highland Park, Lake Forest and Riverwoods.

Does it surprise you to learn that the number of raccoons per square mile is greater in the suburbs than it is in rural areas? This is because our garbage provides ample food for raccoons, and our attics and chimneys provide handy replacements for the hollow trees in which raccoons historically made their dens.

While raccoons sometimes live under decks, their preferred habitat is in the attic. Trees that overhang the roofline, downspouts and trellises give raccoons easy access to climb up to the attic and eaves. Even without any trees or trellises to help them climb, raccoons are such skilled climbers that they can climb up wooden siding, and even brick, by using their sharp claws to ascend the vertical surface.

All attics need ventilation, so vents are the most common place for raccoons to enter. Raccoons also rip into eaves, tear off shingles, enter through peak vents, or bend the blades of attic fans to create passages into attic voids. Most people realize they have raccoon problems when they hear raccoons, but many people’s first indication of the presence of raccoons is noticing that roof vents are bent or have been torn off and are lying in the yard.

Animal-Proof Vent Guards made of strong expanded steel need to be installed over the vents to prevent raccoons from entering. Without these, raccoons can easily damage roof vents to enter attics, because most vents are made of soft aluminum. Even vents made of galvanized steel are easy for raccoons to bend and destroy, because the steel is thin and raccoons have the strength to bend it.

Raccoons have destructive denning behaviors. Once they’ve torn their way into an attic, raccoons soil insulation with their urine and feces. Insulation becomes compacted, and compacted insulation loses its ability to insulate. Once soiled by raccoons, insulation takes on a musty, gamey odor that can be smelled throughout the house for many years. Changing moisture levels throughout the seasons tend to reanimate the odor and cause it to permeate the home. When damage to insulation caused by raccoons is detected during a real estate transaction, the seller is often asked to remediate or replace the insulation before the home’s sale can proceed. ABC Wildlife can replace ruined insulation after a raccoon infestation. ABC Wildlife’s insulation replacement often improves the energy efficiency of homes beyond what they were before raccoons invaded.

In addition to damaging insulation, raccoons pose a fire hazard. They tear and chew on electrical wiring and burrow beneath insulation where they can access recessed can lights and other fixtures, such as bathroom fans and junction boxes. Additionally, raccoons also dislodge the window screen that keeps insects from entering attic fans, causing this torn screen to become wrapped around the fan’s blades. When the fan’s motor labors, but the blades are obstructed by the screen, the motor can overheat and catch fire. When installed preventatively, ABC Wildlife’s attic fan guards protect against raccoon damage and prevent raccoons from entering.

While trapping, roof sets are preferred, because they make the accidental capture of nontarget species, such as opossums, skunks, and feral cats less likely. Cage-style traps should be placed at the roofline where the raccoons access the roof. If the roof is unusually steep, the weather is inclement, or placing the trap on the roof poses undue difficulty or safety risk, traps should be placed on the ground where the raccoon climbs up, such as at the base of a downspout.

Once the raccoon is trapped, a membrane, which we call an “Indicator,” must be installed over the animal’s point of entry to determine if additional raccoons are denning inside. Once this membrane goes unbroken for a sufficient period of time, the traps are taken away, the hole is sealed, and if needed, remediation of the attic can begin.

Raccoons carry a number of diseases that can pose serious consequences to humans and pets. Due to the risk of Baylisascaris procyonis, Raccoon Roundworm, a common parasite found in the intestinal tract and droppings of raccoons. Once ingested, Raccoon roundworm travels through the body to the brain, eyes, and spinal cord, causing blindness and death in rare case. More than 80 percent of raccoons in the Chicago area are infected with Raccoon roundworm, which is believed to be the highest infection rate in the United States, making Chicagoans more vulnerable to the disease than residents of other cities with equally high raccoon populations. Because of the risk of infection, homeowners in Illinois should not own backyard sandboxes, unless the sandboxes are covered when not in use. Additionally, do not allow children to play in sandboxes at parks because this dangerous parasite can stick to children’s hands and be transferred to their mouths.

For immediate service, please call 847-870-7175. Our telephone lines are staffed by experts who are licensed to control raccoons. You can reach us 24-hours a day, 7 days a week.

Q: If there is a raccoon in my attic, how likely is it to come down into my home?

A: Homeowners sometimes become frightened that raccoons are trying to enter the living quarters when they suddenly become very loud, but the noise raccoons make is generally caused by nest building, play, mating or dominance behavior and is seldom tied to breaking through the ceiling.

Other than in these unusual, and often avoidable, circumstances, raccoons generally avoid the living quarters of a home, preferring instead to live in the attic, eaves, and other void spaces.

Q: Does playing a radio, using mothballs, soaking rags in ammonia, or using other folk remedies effectively remove raccoons from an attic?

A: Trapping is a safer and more economical option when compared with what can go wrong when folk remedies are used. Employing any of these techniques can make raccoons more likely to enter the living quarters of a home. In fact, people entering the attic at all, such as to place a radio before the animals are trapped and removed, can encourage them to evade the human intrusion by entering eaves and wall voids where they can become lodged. Once raccoons are lodged in wall voids, trapping them is not possible and the only way to remove them involves cutting the walls.

Ammonia-soaked rags can cause animals to become sick or die, and are known to cause blindness when baby raccoons come into contact with them. Once animals are sick, they are more difficult to trap, because their normal foraging behavior often ceases. Sick or injured raccoons are more likely to crawl into wall voids where they die, necessitating costly removal that involves cutting through wood and drywall.

The most economical and consistently effective way to remove raccoons from an attic is having a professional set live traps to capture and remove the animals.

ABC Humane Wildlife Control & Prevention is an animal control and prevention provider based in Arlington Heights, IL. For over 40 years, we have served individual home owners, commercial business owners, property managers, and municipal customers dealing with raccoon problems. Below are some of the areas where we have helped customers deal with raccoon invasions in both homes and businesses. This list is not exhaustive.

If you are located in Northern Illinois, please contact us today at 847-870-7175, and our expert animal control specialists will be happy to help.

Want To Get Rid of Your Raccoon Problem? Contact the Experts.

Don’t let raccoons ruin your home, risk your health, and destroy your peace of mind. Contact our experts to get the job done right.