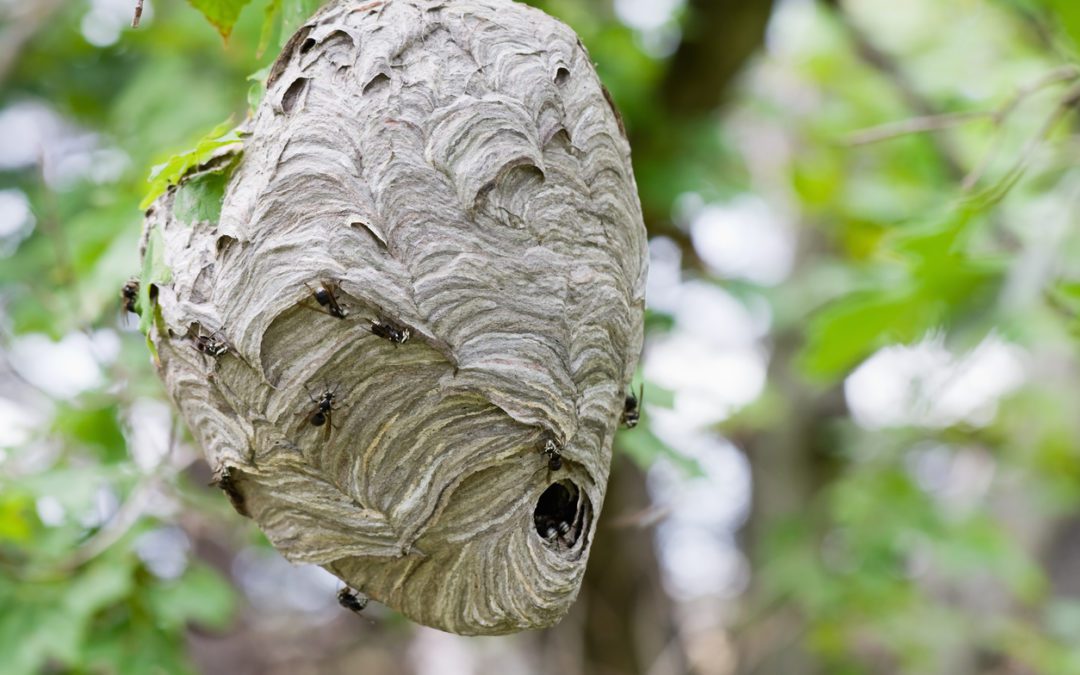 Most bee and wasp species common in the United States are social insects that establish colonies, taking up residence in natural and man-made cavities or constructing aerial nests to offer newly laid eggs and developing young protection from predation and the elements.

For the homeowner, being able to quickly identify the nest type will give clues as to which bee or wasp species is responsible — and how to treat them. It is important to identify the type of bee or wasp nest when planning to remove a colony from an area near your home.

Bee and wasp nests can be categorized into three basic types. It is worth noting that certain species may show a preference for a specific nest type. For instance, bald-faced hornets are exclusively aerial nesters, while bumble bees and yellow jackets are less specialized in their nesting habits.

Bald-faced hornets commonly build aerial nests in trees. The exterior of the nest has a shaggy appearance, protecting the cells containing developing young and eggs. The nest consists of several tiers of comb covered by a round, paper casing with an entrance at the bottom. If you see an off white ball with a hole at the bottom hanging from a tall tree branch, odds are you have a bald faced hornet nest. They are typically located about 10 to 20 feet high in tree, although they may be built on the sides of houses. The nest structure grows rapidly since workers continually add to the paper nest as the population grows. As fall approaches, colonies produce males and new queens, which leave the nest to mate. Newly mated queens burrow into the ground where they spend the winter. The workers, males, and the old queen perish in the fall. Nests are not reused.

Polisties, or paper wasps are the other common aerial nesting species. Polisties wasps create small paper nests that are often found on the eaves of homes. Polisties wasps are generally not aggressive and can generally be left alone.

Honeybees will seek out hollows in trees, abandoned rodent burrows, and the voids between walls to establish their nests. The nest is constructed entirely of wax in a characteristic honeycomb pattern. Each cell of the honeycomb will house a single egg or developing bees.

Bumblebees will also nest in abandoned burrows and surface crevices, but the waxy comb is much more haphazardly built compared to the orderly appearance of honeybee comb. 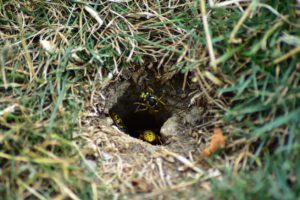 Bumblebees and yellow jackets occasionally nest underground, often along the roots of landscape shrubs and trees. The entrance hole may be difficult to spot, partially covered with leaves and other ground debris.

Regardless of the type of nest, we encourage you to exercise caution when you have active colonies of stinging insects on or around your property. If you have any questions about what type of nest you have on your property, give us a call. We’ll be happy to help. We have professionals on staff who have the proper training and equipment to handle any bee, wasp or hornet problem. We’re available 24/7 to assist you. 847-870-7175.